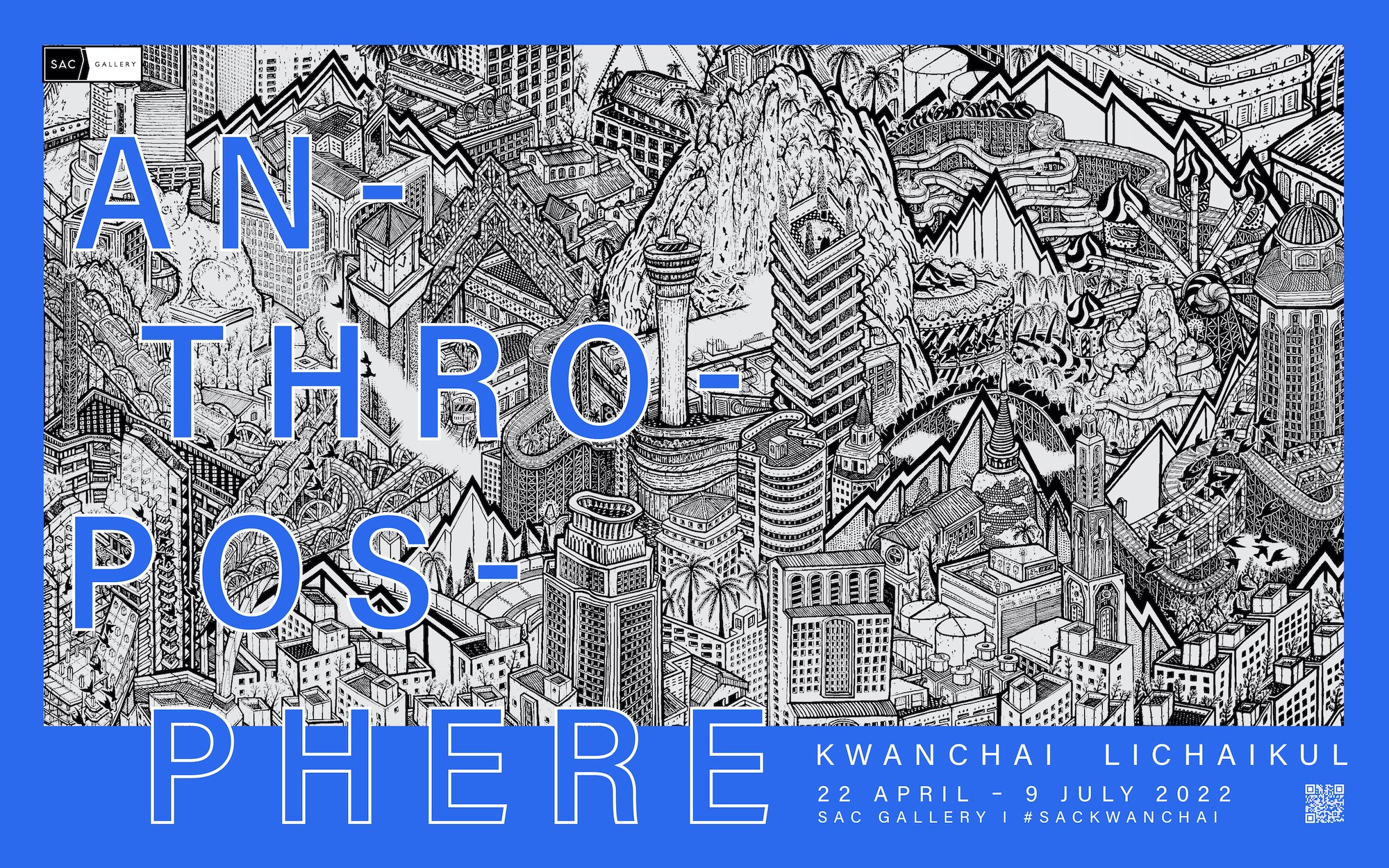 Over the past several years, Kwanchai Lichaikul has introduced new perspectives through the world of bird’s-eye view painting. While technology may allow modern humans the ability to peer down on the world from above, the nuances of society are often left unseen through these lenses. Conversely, Kwanchai’s works allow humans to identify the movements of capitalism in the present day, be it through the changes in culture, areas of industry and agriculture, and the foundational co-dependent relationship between humans and the Earth. Nevertheless, varying perspectives can be found through the consumption of news, stories, and history. As humans expand their territories for the purposes of residency and farming, drawing more and more upon the Earth’s resources to fuel our industries, Kwanchai’s illustrations portray these crucial details that reflect the interaction between lifestyles and cities, creating in movements within the paintings that afford us the chance to observe relevant events through a reshuffling of society shown in his works.

The picture of Thailand’s political activities as seen from a wide angle invites us to consider the influence of church mural paintings, especially after the major shift in wall-painting styles that occurred during the reign of King Chulalongkorn (1868 – 1910). During this era, the subject matter of wall murals changed from supernatural legends to depictions of the cosmos and astrology as influenced by the works of renowned artist Khrua In Khong, opening new possibilities to the art of storytelling through the medium of wall paintings through the depiction of dharma puzzles. These paintings were meant to signify that the teachings of Buddhism are relevant to the modern world, and can be explained through the means of logic and discourse. As such, the paintings of Khrua In Khong acted as an important catalyst for the development of wall murals, in particular the bird’s-eye view perspective, which was improved upon, experimented with, and adjusted to the contexts of both religion and contemporary art.

Furthermore, the use of the bird’s-eye view perspective to convey a narrative is an art form that has been used throughout Asia and Europe since ancient times. From cartography to religious paintings, each of these disciplines utilize different methods in utilizing cosmology. Once photographs – hailed as an instrument capable of capturing truth by way of science – began having a role to play in illustrating, the truth as derived by these mechanisms of sight have notably been inserted into wall murals. Thailand serves as a prime example, as the painted scenes of cosmology underwent a major transformation throughout history, including the contemporary art scene of today. These paintings are a form of cultural medium that possesses its own language, designed to facilitate concepts of societal structuring with a foundation of unequal relationships between varying groups that serve different functions in society, while also exploring the cultural forces driving it forward.

Based on these developments, murals possess a new dynamic in terms of storytelling, and Kwanchai is among the many artists influenced by these major developments in the craft of wall mural painting. As new practices and methods of wall painting continue to be devised and defined, artists utilize only the language of lines to tell the stories of each region, its people, and its vistas, from homes and structures to monuments significant to the community, all spread across the city. The division of each district and area based on Sintao lines, in particular the competition for space, social standing, and culture. From the stories of ordinary folk to the existence of the elite, the crowded facade is hidden by the fragility of the foundations that invite audiences to ponder on the existence of a community that is filled with diverse people and ideas.

Additionally, the portrayal of the events and activities in people’s lives found in wall murals reveals a societal identity that is still diluted by conflict arising from clashing ideas, illegitimate use of authority, and the vastly differing qualities of life between the classes. Photographs and news reports have played an important role in informing us of various minutiae of a society. Beyond just exploring the cities on foot, Kwanchai relies on news reports published by various sources, including social media, to complete a painting that is representative of the world; of the spaces within it, and the communities within those spaces, particularly the significant events captured in these illustrations. These concepts collectively form the history of not just the human race, but of the environment and the earth as well. As no matter the changes in nature or its disasters, humans and the Earth have an unbreakable and inevitable bond.

The Anthroposphere exhibition by Kwanchai Lichaikul deals with the portrayal of truth without any miracles or supernatural phenomena, and is another important milestone for an art form that is conceived from wall mural paintings, introducing new expressions that correlate to the activities of people as they make their way through the cycle of societal systems. The exhibition pieces together the stories of people, structures, nature, and current events all at once. Though differing in terms of time and space, all things are capable of demonstrating the causational strands that connect past, present, and future. Ultimately, it is the audiences themselves that will act as the medium, connecting the experiences within each painting and becoming part of the ecosystem where history and humanity – as residents of this world – finally meet.