English
A DREAM WITHIN A DREAM

A DREAM WITHIN A DREAM

A DREAM WITHIN A DREAM 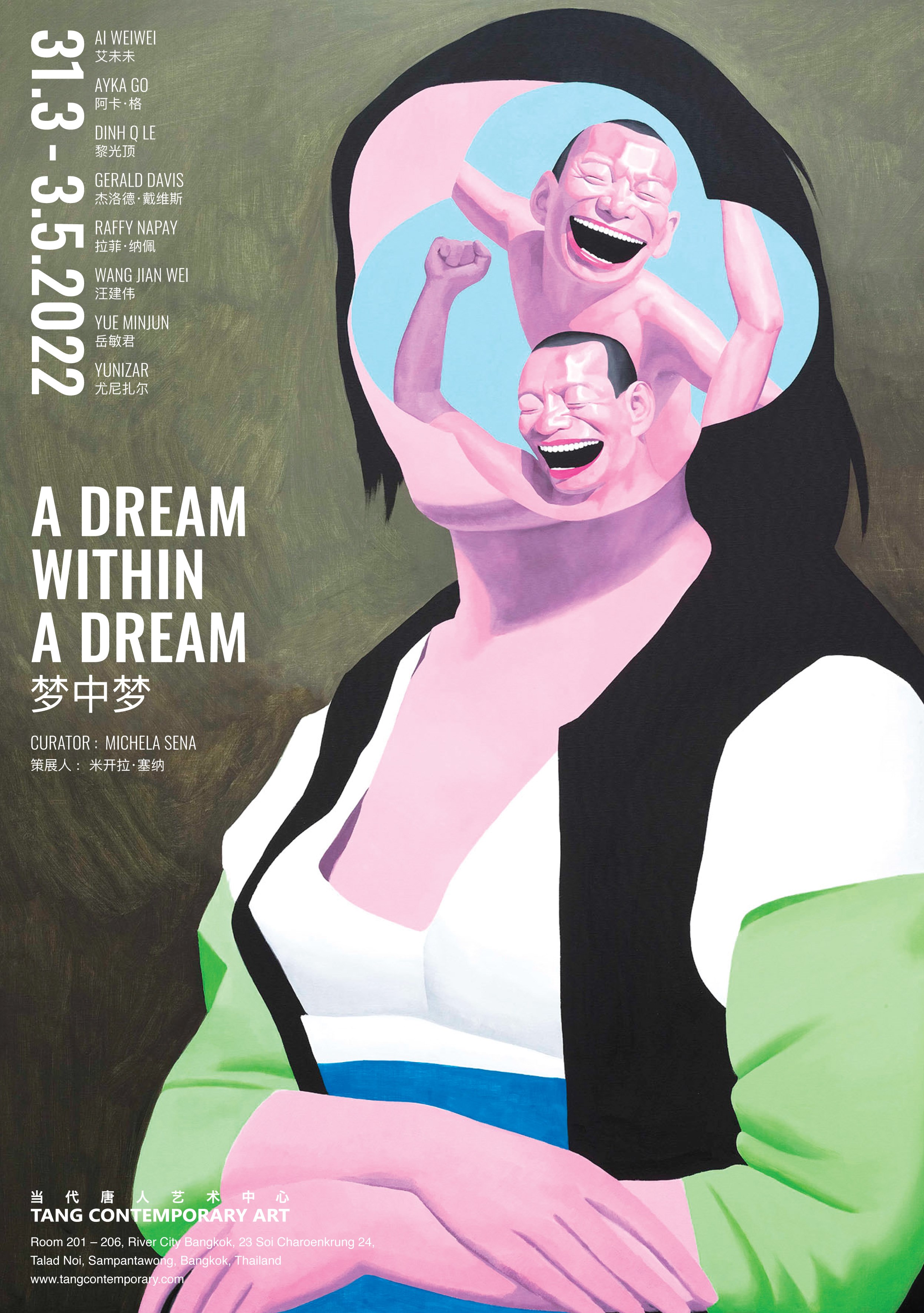 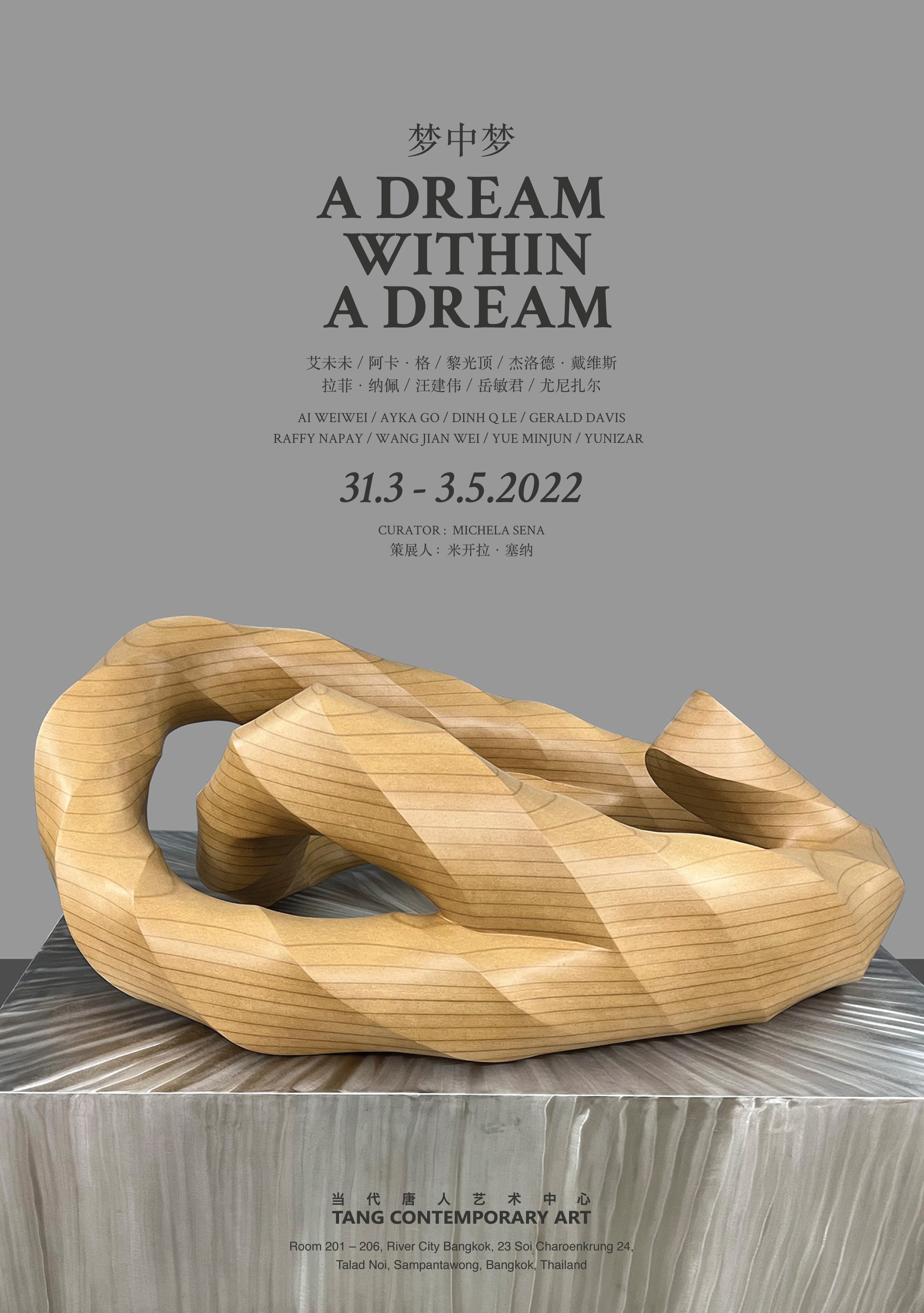 Tang Contemporary Art is proud to announce the opening of “A dream within a dream,” a group exhibition curated by Michela Sena and featuring the works by Ai Weiwei, Ayka Go, Dinh Q Le, Gerald Davis, Raffy Napay, Wang Jian Wei, Yue Minjun, Yunizar at Tang Contemporary Art in its Bangkok space. The exhibition is running from March 31th through May 3rd, 2022. The exhibition features works by Chinese and international contemporary artists from all around the world, who use a variety of techniques and styles but come together to form an unified identity in the show.

"A Dream Within A Dream", this is how Edgar Allan Poe titled his poem in 1849; not only is this poem one of his most famous, it’s also one of the darkest.

His artworks subvert the concepts of time and space to give new life to an indecipherable reality. Returning us an individual and sublime perception of his own artistic world. So magnificent from an aesthetic point of view and equally profound on a

Similarly introspective is Yue Minjun who, with his obsessive repetition of “self”, is in search of a lost identity. His laughter, the hallmark of his work, is Yue Minjun’s representation of a state of helplessness, detachment from contemporaneity. The same laughter gave birth to artworks that are milestones in the history of contemporary Chinese art. The works on show in our exhibition belong to his mature season. The color palette becomes more vivid, the flowers and shapes suggest a dreamy atmosphere allowing the aesthetic factor to prevail, giving life to absolute masterpieces.

“Unique” is Ai Weiwei's approach to reality. A reality he no longer recognizes and where he feels lost, using his own words, while referring to refugees : “I am a refugee, every bit... Those people are me. That’s my identity.” Struggling to feel at ease in a society that changed much faster than the human pace, he finds himself an orphan of his own context.

His reaction meets his characteristic “self-centered” practice: art and identity coincide in his works. His vision of reality molds his identity, leading him to incontrovertible active practices. In Ai Weiwei’s art, the collision with reality generates active reactions towards the outside, without boundaries between the reality and what he feels, what he sees and what he returns to us.

Extroverted reaction to reality is also shown in Dinh Q Lê’s practice. Born in 1968 in Vietnam, Lê’s works and art practice revolve around the themes of identity, history, and memory, which span from his well-known woven photographs to different media. He questions how visual culture may influence the perception of a national identity. As a refugee who migrated to the US, Lê lived and studied in California. Sparked by America’s prevailing perceptions of the Vietnam War, he draws inspiration from the war and its lingering consequences on the Vietnamese community.

questioning whether life itself is just an illusion: "a dream within a dream".

It expresses doubt and uncertainty about the nature of reality,

In the same way, the artists on show are all confronted with the concept of reality. Confrontation can be

disarming, inevitably leading to introspection. This is the case with Wang Jianwei.

Coming directly from the natural world that surrounds him, the elements depicted in Yunizar’ canvas, become characters of his artistic imagery. Conceived from the holistic concept of “rasa” (the act of perceiving the whole at once, involving simultaneously feelings, emotions, sensations, perceptions and judgments), his works depict visions of a lost world, so natural and archetypal as to become mythological. Unaffected by any trend coming from contemporary society, Yunizar silently witnesses the transformation of Indonesian traditional culture, gradually eroded under the pressure of modernity, yet present contingencies can’t override his own dimension.

Davis's works are among the best examples of the recent return to figurative painting. Through the element of beauty, he gradually brings the viewer to dig into an intimate dimension, made of dreams, fantasies, memories. The external reality is no more important than the intimate dimension, where his paintings originate.

So are Raffy Napay and Ayka Go’s works. Napay uses cotton threads to realize his famous textiles and the reason why he chose this material is probably to be found in his childhood. Growing up with a seamstress mother, he was exposed since a very early age to textiles and fabric. The memory of a lost childhood is resonating through colorful threads in his works.

Ayka Go’s world is the construction of a metaphysical reality: in a suspended atmosphere, random details of everyday life are enlightened by the lenses of her unconsciousness and suddenly reality appears as we had never seen it.

Ai Weiwei is renowned for making strong aesthetic statements that resonate with timely phenomena across today’s geopolitical world. From architecture to installations, social media to documentaries, Ai uses a wide range of mediums as expressions of new ways for his audiences to examine society and its values. Recent exhibitions include: Ai Weiwei: Resetting Memories at MARCO in Monterrey, Ai Weiwei: Bare Life at the Mildred Lane Kemper Museum in St. Louis, Ai Weiwei at the K20/K21 in Dusseldorf, and Good Fences Make Good Neighbors with the Public Art Fund in New York City.

Ai was born in Beijing in 1957 and currently resides and works in Berlin. Ai is the recipient of the 2015 Ambassador of Conscience Award from Amnesty International and the 2012 Václav Havel Prize for Creative Dissent from the Human Rights Foundation.

Dinh Q. le was born in 1968 in Vietnam. Lê’s work and art practice revolve around the themes of identity, history, and memory, which span various mediums from his well-known woven photographs and tapestries to handmade paper, and video and mixed-media installations that question the reception and consumption of images and how visual culture may inform a national identity. Lê and his family left Vietnam in 1978 and lived in refugee camps in Thailand before relocating to the United States. In California where he lived and went to art school, Lê was sparked by the prevailing perceptions of the Vietnam War and its lingering consequences on the Vietnamese people. Lê has been invited to exhibit at the 50th Venice Biennial, as well as Documenta (13) at Kassel, Germany. In 2012 he exhibited a major solo project at the Museum of Modern of Art, NewYork. Lêhasparticipated in numerous international exhibitions, recent solo exhibitions include San Jose Museum of Art, California, USA (2018); Singapore Tyler Print Institute (2018); Museum Boijmans Van Beuningen, Rotterdam, Netherlands (2017); Ikon Gallery, Birmingham, UK (2016); Hiroshima City Museum of Contemporary Art, Japan (2016); Site Gallery, Centre for Contemporary Art, Sheffield, UK (2016); Artangel, London, UK (2016); Mori Museum, Tokyo, Japan (2015); P.P.O.W. Gallery, New York, USA (2014); San Francisco Camerawork, USA (2013). Selected group 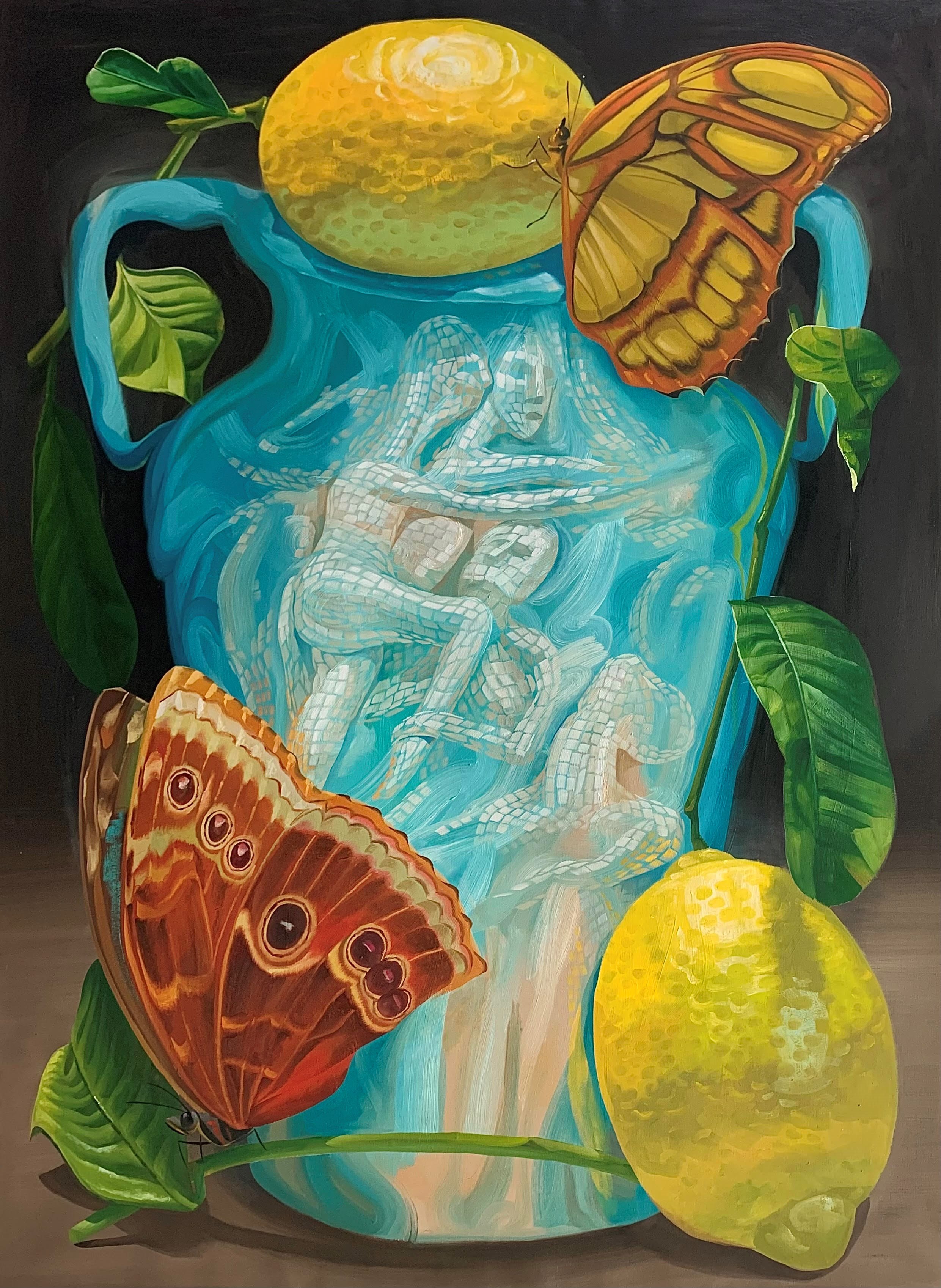 Napay was born in 1986, Manila, Philippines. Napay originally used oil paints, until he developed an adverse allergy to the medium. Whilst recovering, he explored the potential of other materials, and explored working with the available threads and textiles at home. Growing up with a seamstress mother, Napay was exposed to a wide variety of threads, cotton and fabrics and these materials gave him a strong ground into a different world of creativity. The artist realized the creative process was quite similar - from early conceptualization to finishing touches on an artwork. Now equipped with a needle for a brush, thread and fabric as his paint, the artist approaches his canvas as he would a painting. His composition stays true whilst playing with shadow and light, in effect transcending any intuitive boundary between painting and creating a tapestry.

In 2013, Napay was awarded the prestigious Ateneo Art Award, emerging as winner in the Contemporary Artists category, besting artists from all over the Philippines. The award granted Napa Two Artist–in-residence programmes at both Liverpool Hope University in the United Kingdom, and at Artesan Gallery + Studio in Singapore. He has held five solo exhibitions, including a solo presentation at ArtStage Singapore with Artesan Gallery in January 2015, and a solo exhibition entitled Sanctuary at the Ateneo Art Gallery in August. In October 2015, Napay won first prize in the much covetedIl LorenzoMagnifico art awards at the 10th Florence Biennale in Italy. 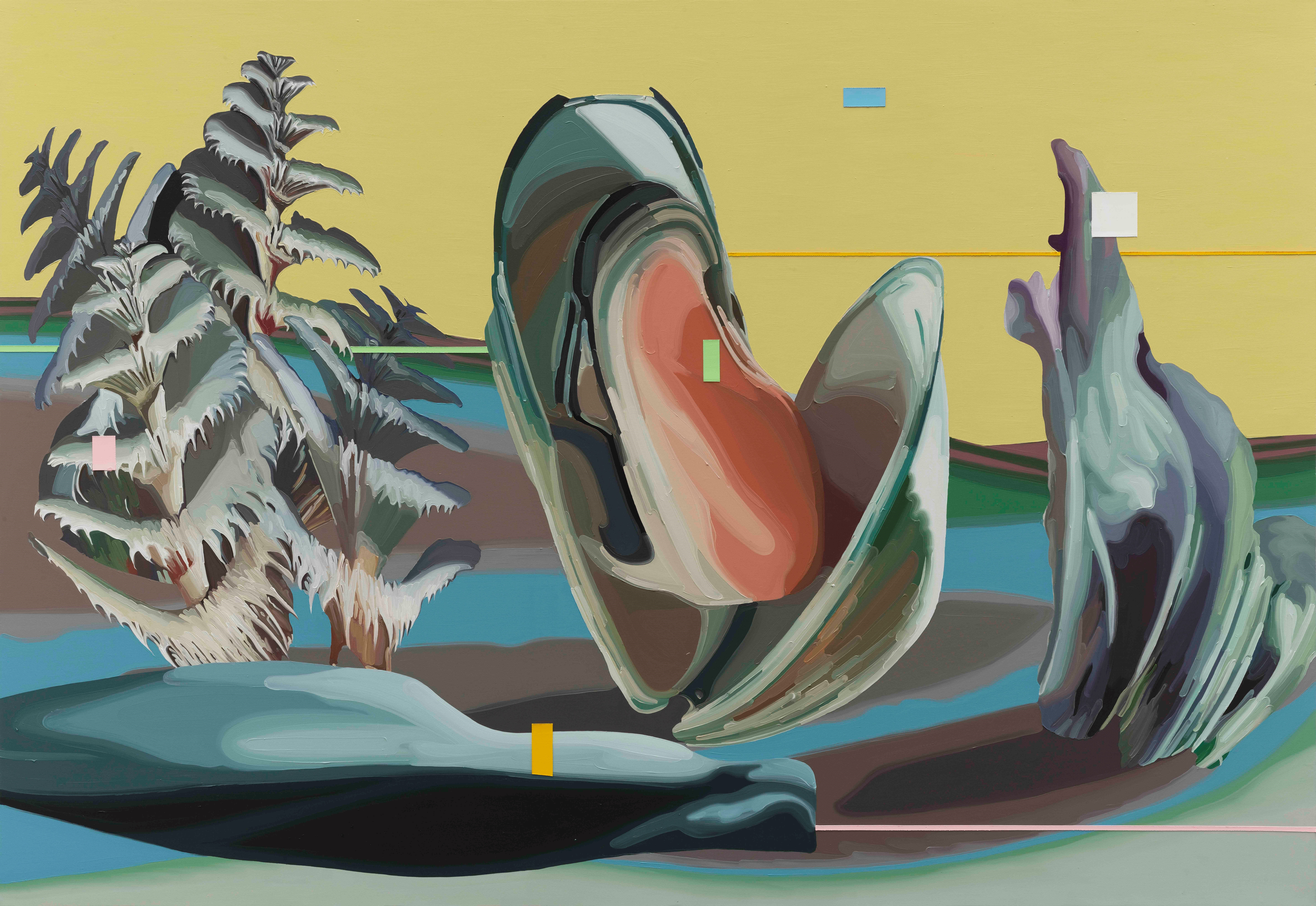 Wang Jianwei was born in Sichuan province, China, now is living and working in Beijing. Since the 1990s, he has been researching the influence of multiple sciences and cross-sectors' knowledge on contemporary art. He borrows and engages the methodologies of different disciplines in order to develop a new language for art. With this cross-fertilized knowledge, he launches philosophical inquiries to practice a cross-sector method to view the reality. Simultaneously, he transforms these visions into art forms, engaging in multiple mediums, including film, theater, multimedia, installation, painting and text etc.

Wang Jianwei has been invited to participate in many film and theater festivals, arts exhibitions and important academic events both within China and internationally. In 2008, he was awarded by Foundation for Contemporary Art (FCA) the "Grant Recipient".

Borned in 1971 in Talawi, West Sumatra, Indonesia, Yunizar is a graduate from the Indonesian Institute for the Arts (ISI) in Yogyakarta, Yunizar is a prominent member of the Jendela group, Indonesia’s most prominent contemporary art collective. 2007 marked Yunizar’s first solo museum exhibition at the National University of Singapore Museum (NUS), Singapore. He has also been awarded Best Painting by the Peksiminas III Exhibition (1995) and received Best Painting from the Philip Morris Award V (1998).

Natural elements are subjects of Yunizar`s large canvases and bronze sculptures; coming directly from the natural world that surrounds him, they become characters of his artistic imagery. Conceived from the holistic concept of “rasa” (the act of perceiving the whole at once, involving simultaneously feelings, emotions, sensations, perceptions and judgments), his works depict visions of a lost world, so natural and archetypal as to become mythological. Unaffected by any trend coming from contemporary society, Yunizar silently witnesses the transformation of Indonesian traditional culture, gradually eroded under the pressure of modernity, yet present contingencies can’t override his own dimension.

Tang Contemporary Art was established in 1997 in Bangkok, later establishing galleries in Beijing and Hong Kong. Tang Contemporary Art is fully committed to producing critical projects and exhibitions to promote Contemporary Chinese art regionally and worldwide, and encourage a dynamic exchange between Chinese artists and those abroad. Acting as one of the most progressive and critically driven exhibition spaces in China, the gallery strives to initiate dialogue between artists,

curators, collectors and institutions working both locally and internationally. A roster of groundbreaking exhibitions has earned Tang Contemporary Art internationally renowned recognition, establishing its status as a pioneer of the contemporary art scene in Asia.